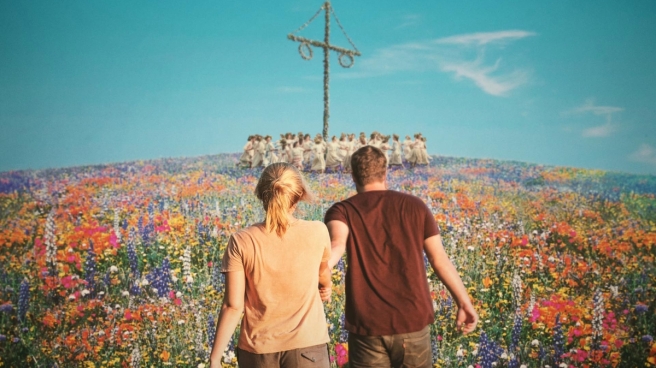 Inspired by a recent breakup Ari Aster has unveiled the follow up to his directorial debut film; Hereditary with an equally disturbing cult horror film simply titled: Midsommar. The film treads slightly different ground from his previous focusing entirely on an unsettling cult hidden deep within the Swedish forest. It’s in a similar vein to the cult seen at the end of Hereditary except they’re much more gruesome and frightening.

The film tackles themes of grief and the many struggles associated with a relationship. The film itself is very much as Aster describes it, “a breakup movie.” Whereas Hereditary focused on the horrors associated with family Midsommar takes a much more personal approach and focuses on two characters who are dating.

Once again, much like Hereditary Aster uses these dynamics in order to deconstruct them as a whole and for a second time, every young character seems to be really into drugs.

Throughout the film, the main couple, Dani and Christian, struggle with their intrinsic differences. The audience watches as their relationship slowly unravels before them all culminating into an astonishing climax and ending.

It’s everything you’d expect from a cult horror film but much more. Ari Aster’s cinematography and writing sensibilities seem to only get better with everything he sets his mind to. Lucky for cinema his time of filmmaking has only begun.