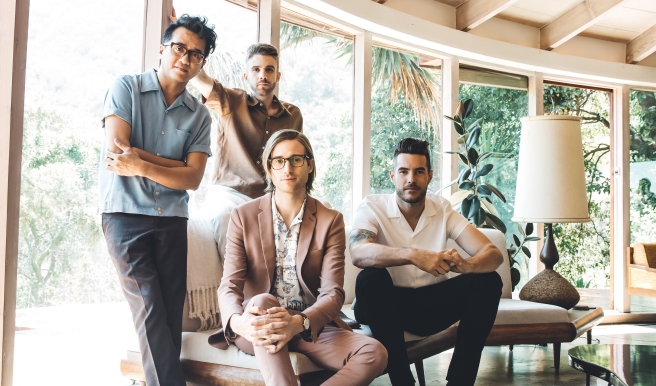 When I think of pop music, my mind tends to narrow toward a view of the genre that encompasses only the most popular contemporary music. Pop is arguably one of, if not the most ubiquitous genre of music today, and whenever I talk to someone about their favorite songs or artists, it comes up more often than not. While I wouldn’t necessarily call that a bad thing, I would argue that there has been an overwhelming saturation of pop artists within the music industry in the past few decades.

With this mindset, it’s somewhat difficult for me to listen to pop music impartially. So when a friend recommended me this “cool pop band,” Saint Motel, I was skeptical, to say the least. I was so skeptical in fact, that it took me nearly a week to actually sit down and listen to their music, but after enough pestering from her, I finally listened to their second studio album, saintmotelevision.

To my surprise, what followed was thirty minutes of pure pop goodness, packed with wonderful vocal performances from A/J Jackson and some of the most unique instrumentals I’ve heard in a while. The word “awesome” gets thrown around a lot, but saintmotelvision is truly deserving of the title. Try as I might avoid waxing poetical, it’s truly an excellent listen. The album spans ten tracks dealing chiefly with love, and if you couldn’t tell from my last piece here, I’m a sucker for love songs. But the way the band goes about writing these songs is rather interesting: they choose to write from nonconventional viewpoints and for the most part, not overly romanticize what love is actually like.

“Getaway” is about an enamored criminal who wants nothing more than to run away with his love. There are some appropriate allusions to Bonnie and Clyde that work well with the message Jackson is delivering, as well as the dark tone of the music. “Destroyer,” the next track, is the record’s finest, a one-two punch of emotional vigor and potent production. The fast-paced drum beat, the sweet brass section, and the angsty yet beautiful sax solo all work together perfectly. It also contains the de facto mission statement of the album:

“I don’t break hearts, I destroy them.”

The following track “Born Again” is from the perspective of a man who is a born-again Christian. There’s obvious biblical allusions throughout the song and an almost comedic edge to the lyrics that adds another dimension to the record entirely.

“Sweet Talk” presents a love story through the eyes of a man blinded by infatuation, as A/J sings,

“You could yell, ‘Piss off! Wont you stay away?’ It’ll still be sweet talk to my ears.”

If you haven’t noticed by now Saint Motel is great at writing punchlines that can make you laugh as well as cry. I’ll never forget the first time I heard this song and how much I related to it at the time. I was able to poke fun at something that had been bothering me, all while listening to some amazing pop music, which was a wholly new idea to me.

​saintmotelvision did two things for me. It gave me an amazing musical experience that I don’t think I’ll ever forget, and it also gave me a chance to widen my perspective on pop music as a whole. Being an amateur producer myself, I admittedly struggle at times with having an “elitist” view of the music world. The place I go to listen to music the most is SoundCloud, where one can find thousands of unheard artists creating amazing songs with quality comparable to Top 40 and radio hits. This has prompted me to have a general distaste for popular music.

But after falling in love with Saint Motel, I realize that it’s a good rule of thumb to at least try and appreciate what’s popular today. Because in all honesty – there’s a reason that popular artists gain the recognition of so many. They’re (usually) genuinely talented and competent musicians that have managed to stand out in a world of thousands more like them. Of course, luck, trends, gimmicks, budget, and connections within the music world are all factors as well, but it’s hard to imagine someone like Justin Bieber being as successful as he is without being majorly talented.

Saint Motel has encouraged me to step outside my comfort zone and be more receptive to popular media.

​Now if you’ll excuse me, I’m going to go listen to Halsey.